Meet & Assist by your professional iJordan tours Representative, who will assist you with visas, Luggage & customs.

Transfer & Check-In: Transfer in your A/C New vehicle to your hotel in Amman.

Breakfast:Open buffet breakfast at the hotel.

Embark to A popular attraction outside of Amman is Ashab Al- Kahf or The Cave of the Seven Sleepers. Mentioned in the Holy Qur’an in a Sura named Al-Kahf (the Cave), it is located outside the village of Al-Raqim, 10 km east of Amman. Persecuted by despotic rule of Trajan for monotheism, a group of pious youths took refuge in this cave. To preserve them, Allah put them to sleep, and when they revived 300 years later (309 lunar years as inimitability mentioned in the Holy Qur’an), they thought that they were only asleep for a day or so. Christianity was widespread by then, and when they were discovered, Allah put them to rest forever at the cave; there still stand Byzantine and Roman ruins as well as a mosque, which exactly fit the descriptions in the Holy Qur’an.

We continue north of Jordanto most important Shrines.

Shuʿayb, or Shoaib, (Arabic: شعيب‎مقام النبي meaning who shows the right path), believed that he was sent as a prophet to two communities, namely the Midianites and the People of the Wood, He is mentioned in the Qur’an a total of 11 times. He is believed to have lived after Abraham, Shoaib proclaimed the faith of Islam and warned the people to end their fraudulent ways. When they did not repent, God destroyed both the communities, Shoaib is understood to have been one of the few Arabian prophets mentioned by name in the Qur’an, the others being Saleh, HUD, Ishmael and Mohammad. It is said that he was known by early Muslims as “the eloquent preacher amongst the prophets”, because he was granted talent and eloquence in his language, his tomb lies in Salt.

Abu Ubaydah was one of the first persons to accept Islam. He became a Muslim one day after Abu Bakr. Who was the man whose right hand the Prophet (PBUH) held and said, `In every nation there exists a man worthy of all trust and the trustworthy of this nation is Abu `Ubaidahlbn Al- Jarraah.” Who was the man whom the Prophet sent with reinforcements to `Amr Ibn Al-‘Aas in the Dhaat As-Salaasil Expedition and made commander of the army that included `Umar and Abu Bakr? Who was this Companion who was the first to be called the Commander of the Commanders? Who was that tall, slim man with gaunt face? Who was that strong, trustworthy man about whom `Umar lbn Al Khattaab said on his deathbed, “If Abu `Ubaidah Ibn Al-Jarraah were alive, I would have entrusted him with the caliphate, and if Allah asked me about him, I would say, I assigned the caliphate to the trustworthy of Allah and His Prophet, Abu `Ubaidah Ibn Al Jarraah, When the Prophet died, Abu Ubeida was among the candidates for the Caliphate.

Shurahbil ibn Hasanah The venerable companion Shurahbil ibn Hasanah was among the early Muslims who fled to Abyssinia. He was reputed for his strong faith, intelligence, bravery and successful administration. Shurahbil actively participated in the Battle of Yarmouk and the conquest of Jerusalem. When the Caliph Abu Bakr Al-Siddiq sent the Muslim armies to Greater Syria, Shurahbil was in command of the army assigned to the conquest of Jordan. Later, the Caliph Omar ibn Al-Khattab appointed Shurahbil the governor of a province in Greater Syria, where he distinguished himself for his fair dealings with subordinates. He died from the plague on the same day as the venerable companion Abu Ubeida Amer ibn Al-Jarrah.

Derar ibn Al-Azwar The venerable companion Derar ibn Al-Azwar was a poet and a fierce warrior who loved combat. He fought in the wars of Apostasy and took part in the conquest of Greater Syria along with his distinguished sister Khawlahbint Al-Azwar. In the town of Deir Alla a mosque superimposed by a dome houses the tomb of Dirar ibn Al-Azwar. The 18th year after Hijra was when he, too, became a victim of the Great Plague.

Check-out: check-out at 7.30 am from hotel and luggage to be stored at your vehicle.

Departure: leave hotel at 8.00 am and direct drive to King Hussein Bridge near Dead Sea for CROSSING into Holy Land, Meet and assist at Allenby border then start your visits to Jericho & Nabi Mousa Tour –Bethlehem Tour – Hebron Tour Check in at your hotel in Jerusalem

Lunch : Included during the tour

Lunch : Included during the tour

Departure: leave hotel at 7.30 am and direct drive to King Hussein Bridge (Allenby Bridge) for CROSSING into Jordan, Meet and assist at Allenby border We drive south to Petra; en route we visit Kerak Shrines (Tombs of the martyrs of Mutah Battle) The most significant and fiercest battle fought during Prophet Mohammad’s (PBUH) lifetime was the Battle of Mutah (629 AD). It took the lives of his closest companions, martyred fighting against a combined Byzantine/Ghassanid army. You can visit the tombs of the venerable companions Zaid bin Harithah, Ja’far bin Abi Talib, and Abdullah bin Ruwahah, in the town of Al-Mazar Al-Janubi, near Kerak.

Zayd ibn Harithah (Arabic: زيد بن حارثة‎) or Zaydmawla Muhammad (c. 588-629 CE), Was a prominent figure in the early Islamic community and the only one of sahaba whose name appears in the Qur’an (33:37).He was the adopted son of the prophet (sallallahu `alayhiwasallam). He was the 01st leader who killed during the battle.

Ja‘far ibn AbīTālib (Arabic: جعفر ابن أبي طالب) (Died 629), also known as Ja‘far at-Tayyār, was the son of Abu Talib ibn ‘Abdul Muttalib (the uncle of prophet (sallallahu `alayhiwasallam)), and the elder brother of the fourth Islam caliph, Ali ibn Abi Talib. Jafar was raised by his uncle, Abbas ibn ‘Abdul Muttalib, for his father was a poor man and had to support a big family. He embraced Islam in around 613. He appointed Zayd ibn Harithah as commander of the army and he was subsequently killed during the battle.

Abdullah ibn Rawahah ibn Thala bah (Arabic: عبدالله ابن رواحة‎) was one of the companions of the prophet (sallallahu `alayhiwasallam), He was one of the twelve representatives of the Ansar who took an oath of allegiance initially, before the Hijra and later spread Islam to Medina. also, he was among the 73 that pledged allegiance to the prophet (sallallahu `alayhiwasallam) in Medina; Abd Allah ibn Rawahah was third in command during the Battle of Mu’tah and was subsequently killed during the battle.

Other shrines of significance to Islam are located in Kerak city. You can visit Prophet Nuh ‘Noah’ shrine, Allah sent Noah to his people to warn them of divine punishment if they continued to worship idols. As stated in the Holy Qur’an in a Sura entitled Noah (Sura 71, verses 1-3): “We sent Noah to his People (with the Command): Do thou warn thy People before there comes to them a grievous Chastisement. He said: O my People! I am to you a Warner, clear and open: That ye should worship Allah, fear Him and obey me Proceed to Petra for overnight.

Today, enjoy a tour of Petra, both a Jordanian national treasure and a UNESCO World Heritage Site. The ancient capital of the Nabataeans, Petra once sheltered Arab traders who came through the region with precious cargoes of spices, silks, ivory, and rare pelts. See the towering treasury, a building rising 140 feet that is cut into the sheer rock face. Along the way, you will also see the impressive architecture of countless temples, water channels, arched gates, and royal tombs, the remnants of a once great culture.

Then back to Amman hotel for dinner over night.

Transfer to the airport for departure flight.

Assistance with formalities by a member of our staff and departure. 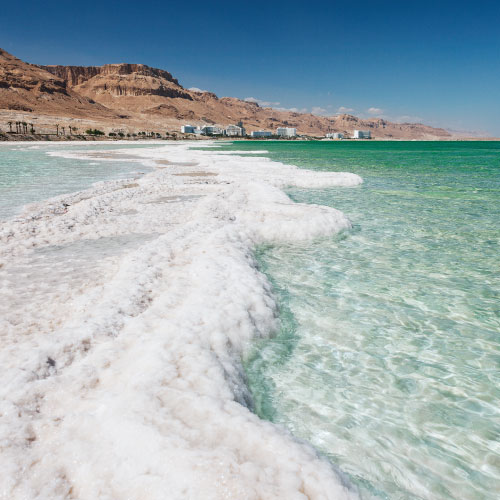 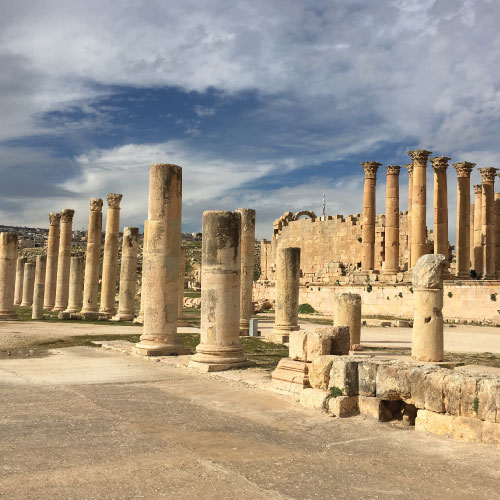 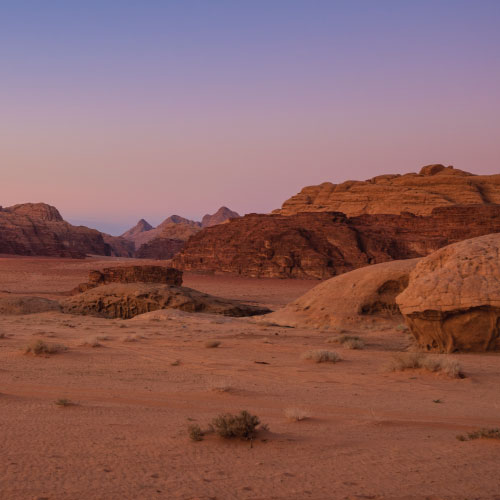 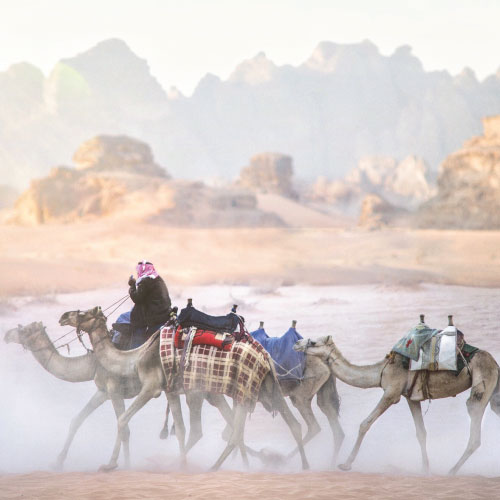